Eight essential hygiene rules for your baby. Here are eight simple good hygiene practices to adopt when you have a baby.

How much time do you spend playing with your kids? According to 87% of SA kids, it’s not enough and they want more play time with you.

How much time do you spend playing with your kids? According to 87% of SA kids, it’s not enough and they want more play time with you.

Parents know that play is important to children’s development, and that playing has a wide range of benefits for each child as well as for parents, and for families as a whole. This was confirmed by the 2020 LEGO® Play Well Study, conducted in 18 countries by interviewing more than 18 000 parents and more than 12 500 children aged 5 to 12 years, including in South Africa.

Kids want more time to play as a family

With 9 out 10 South African fathers that live with their children being economically active, and more than half of mothers working too – along with the complexity of working at home during the 2020 pandemic – it’s easy to see why families perhaps don’t play together as often as children would like.

While children playing quietly with siblings, friends or even on their own may be seen by parents as a great opportunity to get some chores out of the way, it really is worth taking some time out for families to play together.  In addition to the considerable developmental benefits of playing as a family, there’s other magic that happens: parents and children talk more, they laugh more together, and they build family jokes and connections that last long beyond childhood. These connections and the emotional intimacy they create build the foundations for serious and important conversations in the future, where children and adults already have a sense of family togetherness and a deep feeling of belonging.

The benefits of playing together as a family

Playing together as a family is not just important for children’s development – science has proved it’s good for parents too! Engaging in play with their children sees the release of oxytocin in parents, the hormone that plays a role in parent-infant bonding, and which is also known as the ‘love’ hormone. It’s also connected to dopamine and serotonin, together known as the ‘happy hormones’, and helps adults relax, promoting decreased stressed and anxiety levels. “Parenting is always a juggling act, with parents wanting to work to provide their children with the best opportunities possible – and there’s no magic formula that answers this challenge,” Imhof says.

“However, being mindful of the benefits of play, and specifically family play, may help encourage parents to set some time aside to create truly meaningful play experiences with their children, that will offer much deeper benefits over the long term than the significant short-term benefit of simple, joyful time spent together with the people you love the most – your family.”

Read full article on Trusted advice from pregnancy to preschool

The importance of hygiene for your baby at home 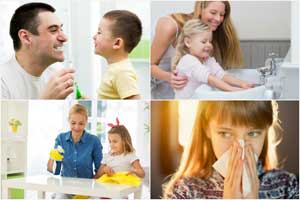 Hygiene is the most important condition in terms of human health. It is especially important when it comes to your baby, who is very vulnerable to germs and viruses as his/her immune system is not like the immune system of an adult. For a newborn baby, where even the smallest microbe would be enough to make her or him sick, the hygiene of the house in which you live in is extremely important.
Hygiene policy in nurseries is of utmost importance. With young children dependent on staff for nappy changes, toilet training and the preparation of their food, it is vital that nursery nurses are properly trained and follow good practice guidelines.

A Community for Moms

Real-Life Ideas and Solutions for Moms